Extraction Labs can be dangerous places. Included in this piece we will look at some of the statistics of the industry as well as a checklist of things you can make sure are included in your next extraction lab.

“Safety first” – it’s more than a sign in the corner of the extraction lab. To the people that work there, it is a way of life. Extraction labs can be dangerous environments especially for methods that require pouring highly flammable butane (or some other volatile solvent) into a cannabis-filled pipe. Respected labs blow up every year, sometimes from operator error, but often due to inadequately designed and built systems. We will go over some of the dangers to avoid and things you can do to improve your odds for your growth or extraction operation.

There Are More Extraction Labs Than Ever

Extraction Labs Can be Dangerous

The process of extracting hash oil for edibles can be dangerous. Over the past 5 years, serious injuries to production-line staff have occurred as a result of fires or explosions in extraction facilities. According to OSHA, most of the states where marijuana is legal offer no safety and health guidance for the new industry. The National Institute for Occupational Safety and Health, which researches work-related injury and illness, has conducted only two hazard evaluations of legal marijuana facilities, neither of which focused on the extraction of hash oil. Even in those states that do offer safety and health guidance — Colorado, California, Michigan, Oregon, and Washington — fire safety officials complain that worker safety protections are often inadequate.

Since 2018, when recreational marijuana sales officially became legal, California has licensed at least 154 businesses to use explosive solvents such as butane to produce extracts. Licensed businesses pay fees of up to $75,000 per year and must use equipment that keeps solvents contained. They must also pass a fire-code inspection and train employees on safety standards. Reuters (June 2019)

Following an uptick in explosions in Colorado, fire officials there persuaded the National Fire Protection Association, which establishes a fire code for the whole country, to amend its rules to address hazards at facilities that grow and extract marijuana. The revised code requires any hazardous hash-oil extraction process to be performed in a non-combustible room, in a building that contains no child or health care facilities. Staff must be trained on the safe operation of the extraction equipment, and the extraction room must be equipped with a gas detection system and multiple fire extinguishing systems. Politico (Feb 2019)

Chris Witherell, an industry consultant in California, says most of the hundreds of hash-oil operations he has inspected don’t pass the first time he visits. With poorly operating equipment and incorrect parts, many extraction operations are at a higher risk. This is supported by the number of incidents still occurring across the country to reputable facilities.

In May 2017, a burn victim from a medical cannabis dispensary explosion sued his former employer, New Mexicann Natural Medicine Inc. for an explosion that occurred while he was extracting THC using butane. Montoya claimed he did not have the proper equipment, training, or emergency protocols for dealing with such a dangerous extraction procedure. Click here to read more about the incident.

Recently GenCanna (an agricultural technology company with a hemp processing facility in Clark County) confirms that the G1 building of the Hemp Research Campus caught fire (Nov 7, 2019). Firefighters also reported that there was an explosion.

And according to the DEA:

There are good grow and extraction facility manufacturers out there. Now that you have your checklist in hand, make sure that whoever you choose can address each item to your satisfaction. You should expect a unit built by someone that knows what they are doing. Find a company with onsite architects and design folk to help you create a safe and certifiable version of what you see in your head. Companies that have been around building this equipment before cannabis became popular again. That way you know what they are focused on is quality and longevity, not a fast buck in a new market. 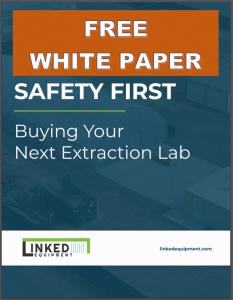 Click here to read the White Paper (includes a “Safety Checklist” for your next lab).

At Linked Enterprises, we prioritize safety and security in our C1D1 and C1D2 extraction labs. Our cannabis extraction labs are technologically advanced and have undergone 3rd party engineering peer review to ensure we supply our clients with the highest quality labs. Also, Linked Equipment extraction labs are fully customizable and can be arranged in a number of configurations, making it easy to scale up rapidly and expediting your time-to-market.

We design and build our parts to work together. When we source equipment, it is from vendors built into our design specs from the outset, not as an afterthought. Our C1D1 and C1D2 extraction labs are designed to meet all state and county regulations, depending on your state and county. Linked Enterprises systems have been professionally engineered and are technologically advanced extraction pods that meet all regulations in legalized markets.
We can custom build your C1D1 and C1D2 extraction labs that can scale easily with your needs and be configured in a number of arrangements.

Give Us a Call

What Goes into a Linked Equipment Build?

A Solution to the World's Agricultural Problem